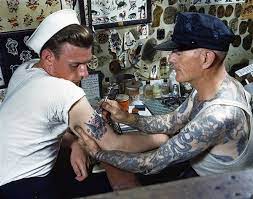 THE FOREFATHERS OF TATTOOING 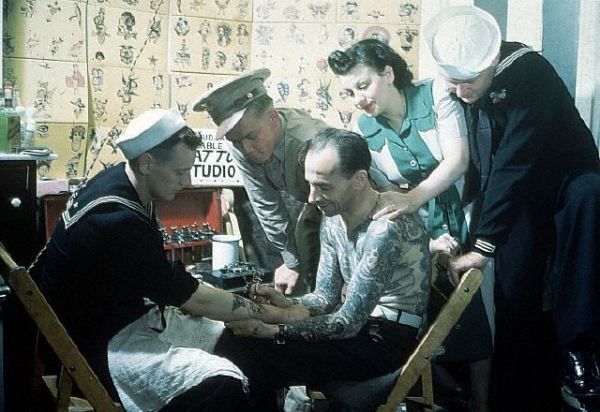 Some of James Cook 's crew members allowed Tahitian locals to tattoo their skin on their first voyage to the southern seas in 1769 as a way to remember their time immersed in this exotic and distant culture.

They introduced the so-called "Tataus," a former native ritual practice, as a fashion statement for the first time in Europe. The majority of the initial artwork consisted of native tribal emblems, the predecessors to today's

In his "Journey Around the World" (1805) book, the Russian admiral Krusenstern detailed how every member of his crew got inked while at sea. A professional tattoo artist who was recruited on board could practically tattoo all the sailors due to the popularity of tattoos at the time.

A Sailor Without A Tattoo Is Like A Ship Without Grog: Unseaworthy, as Samuel O'Reilly once quipped.

The majority of tattoos were still applied by natives on sailors, and over time, native tribal themes and European designs gradually merged.

The majority of their initial tattoos were of symbols for the southern seas where they got their ink done, such as palm trees, exotic birds, ships, anchors, pin-ups, or lighthouses. maritime patterns that were deeply meaningful to each and every carrier.

The patterns were carried as lucky charms and revealed a strong connection to the sailors' native land and its inhabitants. These types of patterns and pictures are considered traditional tattoos nowadays.

Many sailors picked up on the indigenous' skills and applied them on their ships or while on shore leave, as well as passing them on to others. Professional tattoo parlors all over the world got their start at seaports in this fashion.

The majority of the shop owners were former sailors who were forced, for lack of any other options, to apply the Tataus in the conventional native manner: a wooden stick mounted with a Tatau Comb made of bones and tusks, the so-called "Au," was dipped in ink and pushed into the skin with a stick known as a "Iapalapa."

It wasn't until Samuel O'Reilly invented the first electro-mechanic tattoo machine in 1891 that tattoo artists could apply ink considerably more quickly and with far less discomfort.

The actual father of those still popular sailor/traditional designs is Charles Wagner. Some of their meanings are:

Check out the meanings of these popular tattoos to find out what your ink might mean for you!