If you've wanted to get a spider tattoo but are lacking in the inspiration department, you've come to the right place. Spider tattoos don't have to be boring or basic - they've got origins in Greek mythology, and the potential to make your spider tattoo designs epic is limitless.

This quick guide will provide you with a little inspiration for your next spider tattoo. Read on for more. Spider and spider web tattoos generally mean mystery, power, growth, and bravery. They are especially symbolic of female power, as well as sensuality, seduction, and even entrapment.

Of course, only the person wearing the spider tattoo has a full grasp of its meaning, and you're free to interpret your spider tattoo however you want.

The spider's web is historically linked to prison tattoos and the inevitable passage of time, though they also evoke concepts of creation and connectivity in today's time.

Black widow tattoos are popular amongst men who are seeking femme fatales in their life, while the earthy tarantula offers a great basis for a realistic spider design. Sure, spider webs may look cool, but they, unfortunately, have an overwhelming association with prison tattoo culture and gang members. However, they have become increasingly popular in mainstream tattoo culture, and their darker meaning is slowly diluted.

Spider web tattoos are often used to symbolize the various facets of human existence, and you'll often see people with web tattoos with spiders crawling throughout them to represent themselves and humanity as a whole.

Webs of interconnectivity, webs that trap, a web of lies - these are all things that this tattoo design can represent. Or, it can represent none of them. That's the fun of tattoos! Tarantula tattoos are some of the more versatile spider-themed tattoos out there. This furry, large arachnid is instantly recognizable and is notorious for building its dwellings close to those of humans.

They are often used to represent passion, artistry, and devotion to the things that matter most to us. While there are plenty of stylistic variations to choose from when designing your tarantula, the great thing about these tattoos is that they can fit anywhere. Perhaps the most famous spider in the world, the black widow, is capable of representing a myriad of things. From the Gothic Lords of Darkness to a simple love of creepy crawlies, there's one thing that everyone loves about black widows - they're undeniably cool.

Its slender body and bright scarlet pattern against the black of its torso make up the visual allure of these stunning critters, and these elements align with the black widow's use as a conduit for representing sensuality and seduction. This goes for both men and women, and the magic web these spiders weave has been inked onto millions of bodies for years.

A Spider in its Web 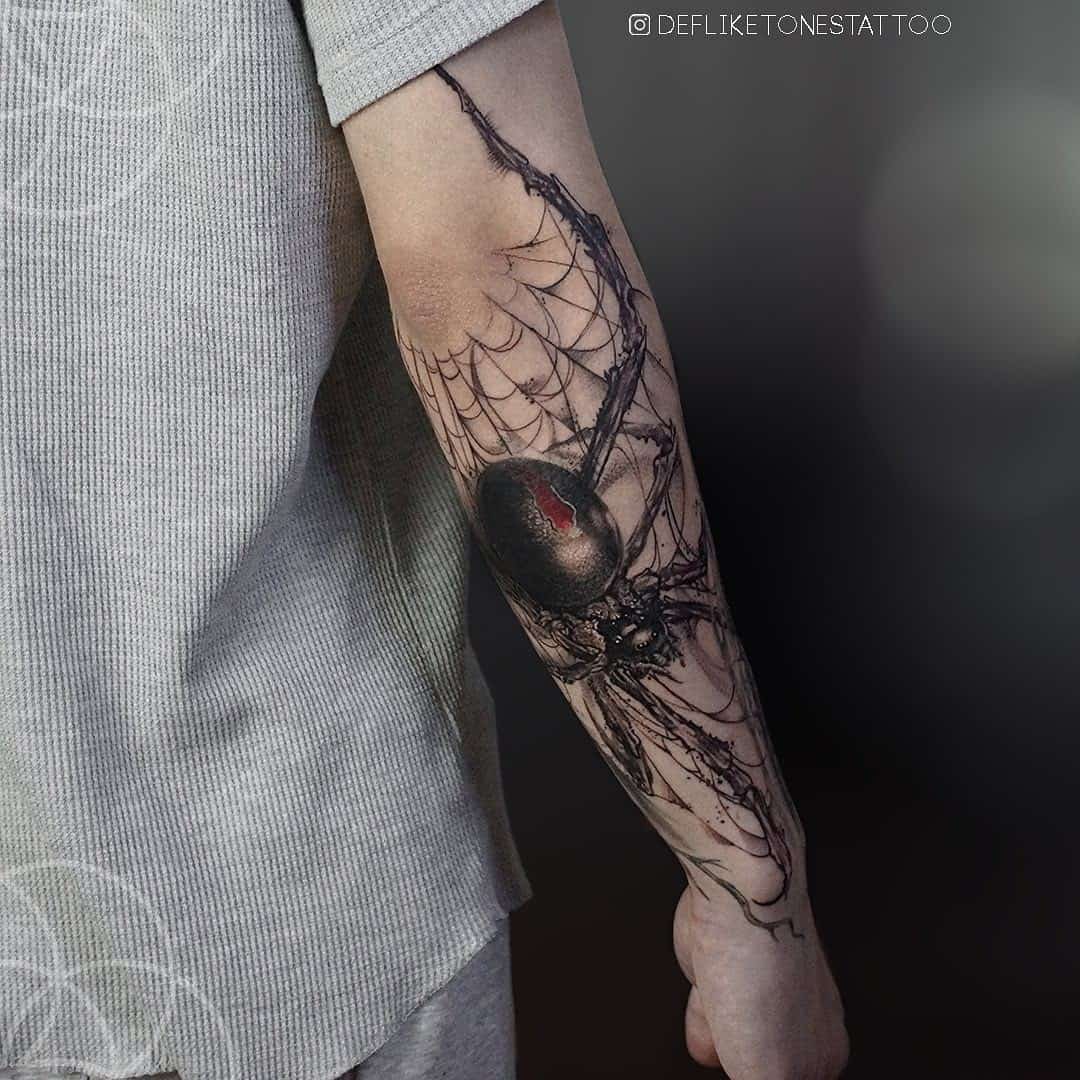 If there's one thing that spiders are known for, it's spinning webs, so naturally, spiders in webs are some of the most common spider tattoo designs out there. While they're not the easiest to pull off, they can look wickedly cool if done right.

A spider inside a web might represent someone who is aware of the fact that they have to make their own choices and cannot blame others for things that go wrong in their life. They're a good representation of being responsible for your decisions and 'building your own home.'

If you're into the darker things in life, then a spider in its web can also be used to represent deception and manipulation - 'weaving a web of lies,' so to speak. Of course, your tattoos don't have any meaning behind them, so if you're looking for a cool design, you can't go wrong with a spider in its web.

We have some suggestions if you are not looking exclusively for tiger tattoo ideas but want to explore other animal-themed designs.

Here are some other tattoo ideas for different animals:

Spider tattoos are highly versatile and can be used to represent a myriad of things. The design possibilities are endless, as are the placement options, so if you're stuck on what to get for your next tattoo, consider getting a spider!